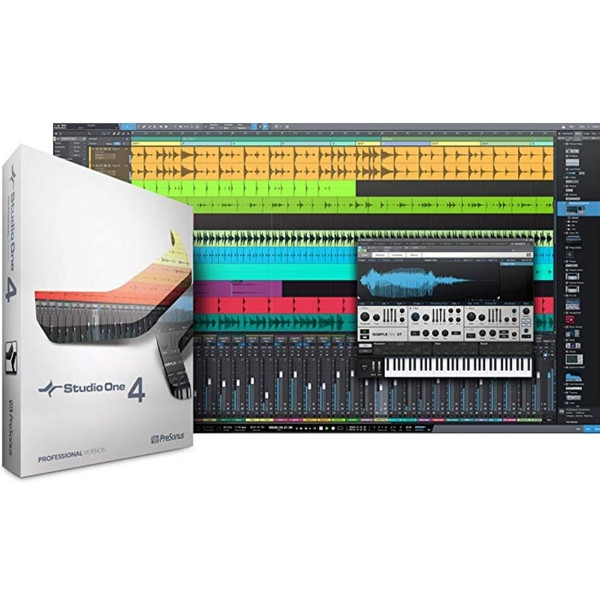 What's new in Studio One 4.5 Professional

PreSonus Studio One 4.5 Professional is a worthy update. Multi-core optimization for virtual instruments reduces your CPU load by as much as 70%. Groups can be nested, named, colored, and assigned to keyboard shortcuts. Expanded input, gain staging, phase options, and channel customization puts a lot of power under your fingertips, even if your hardware doesn’t support it. Robust routing options enable you to route to single sources/destinations with a single click. Global pre-fader metering has been added to the console, as well as an RMS/Peak metering option for all channels. New note editing options make working with MIDI more powerful than ever. Benefit from new export options, including variable-bitrate MP3, AAC, and ALAC. Keep your plug-ins and virtual instruments organized with a streamlined plug-in manager. What’s more, you can lock individual items in the Arrangement Window to prevent unintentional moving or editing. A worthy update indeed!

Nobody enjoys using bloatware, and Studio One 4.5 Professional is anything but bloatware. Thanks to multi-core optimization, the CPU load for using combined virtual instruments inside a Multi-Instrument has been reduced by 70% for native plug-ins. And if you’re using a third-party instrument, you can expect a 50% reduction. Mai Tai and Presence XT have also been optimized.

Groups are more powerful than ever

With PreSonus Studio One 4.5 Professional, Groups can be nested (great for drums), named, colored, and assigned to keyboard shortcuts. You can define attributes for Edit Groups and Mix Groups, such as Volume, Pan, and Mute/Solo. Editing and activating Groups are a breeze — you can do it with a single click — and you can display them on a per-channel basis. Beyond that, you can temporarily suspend grouped items from their Group and edit them individually with a simple Alt-click.

The Input Channel mixer section in Studio One 4.5 Professional puts lots of power at your fingertips. You get software-based input gain and polarity controls on every input, even if your hardware doesn’t provide them. This means that you can use hardware and software-based gain controls in tandem to drive your hardware preamp into saturation, while maintaining absolute control over the levels in your DAW. Polarity and Gain controls have been added to every audio, instrument, FX, and Bus channel. That said, you can show as much (or little) information as you’d like, including Audio Device Controls, Input Controls, Sends/Cue mix, I/O connections, VCA connections, Mix groups, and Channel Notes — it’s all up to you.

PreSonus Studio One 4.5 Professional’s MIDI editing capabilities are spellbinding. The Note Actions menu is particularly noteworthy, enabling fast, intuitive editing and composition, with creative note editing options for instrument tracks including Randomize, Apply Scale, Mirror, and more. You can assign any of these functions to a keyboard shortcut, and they’re included in Macros. You also get independent quantize grids (including the new Snap to Zero Crossings option) for the Arrangement, Audio, and Music Editor, allowing you to apply different quantization to each. Studio One 4.5 Pro includes two additional scale options, and the Chord Selector includes a Chord Audition feature — a godsend if you compose by ear.

Studio One 4.5 - Everything You Need To Know About The Latest Version Of PreSonus Studio One 27:34

Studio One Experts Russ Hughes and Paul Drew take an extended look at the latest version of Studio One, version 4.5, that includes over 70 new features and is free to existing owners of Studio One 4. Read more here. https://www.pro-tools-expert.com/studio-one/2019/5/18/studio-one-45-presonus-announce-studio-one-45-a-free-update-with-over-70-new-features