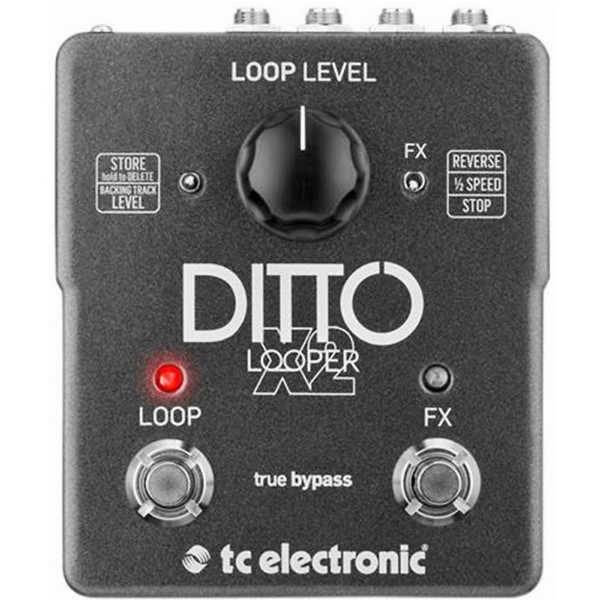 The thing that made the original Ditto Looper such a widespread success was just how easy it was to use. Rather than requiring some elaborate, multi-switch tap dance to start and stop loops, all of its basic commands such as record, overdub, start, and stop were easily accessible via a single footswitch. So, when TC Electronic developed their Ditto Looper X2 pedal, they felt no reason to reinvent the wheel, providing you with the same straightforward operation you're sure to love. They did, however, add an internal dip-switch that lets you choose the configuration of this control. Select from either loop/play/overdub or loop/overdub/play to get the control set that best fits your style.

Onboard looping effects let you create cool atmospheres
Here's where the TC Electronic Ditto Looper X2 gets really cool. In response to tons of feedback, TC Electronic added a couple of cool effects options to the Ditto Looper X2. These effects include half speed playback and reverse playback. What's more, you can combine the two modes together to create interesting musical atmospheres and unique sonic textures. And if you don't want to play with effects, you can use the FX footswitch as a dedicated loop stop control.

USB connection lets you pass tracks to and from your computer
Another cool improvement in the TC Electronic Ditto Looper X2 is its ability to pass loops and even whole backing tracks to and from your computer via USB. Not only does this give you huge performance power, when you're just trying to learn a song and don't need a looper, this feature makes it easy to cue up your favorite tunes. Cooler still, TC collaborated with JamTrackCentral to provide you with a whole library of wonderful backing tracks to get you started. And with the Ditto Looper X2's stereo I/O, you can take full advantage of any tracks you find.