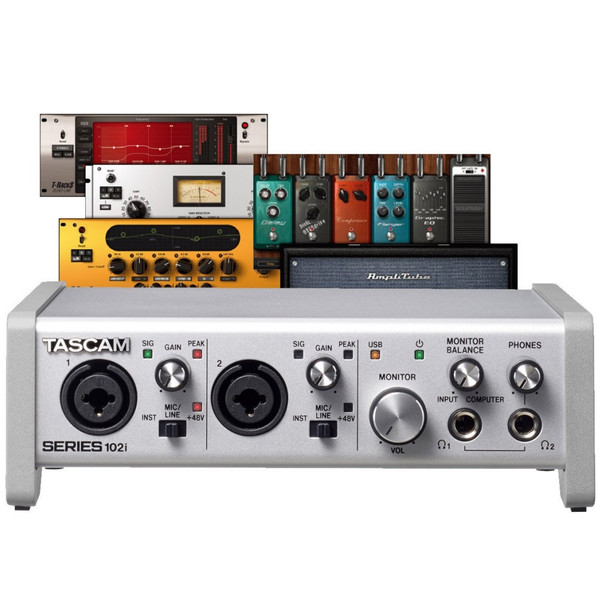 The TASCAM Series 102i USB audio interface packs an impressive amount of connectivity into a compact and rugged desktop format. And with its built-in effects and processing, you’ll be able to treat your audio with reverb, compression, and EQ on the way into your DAW software. For maximum flexibility in your home studio, the Series 102i features a DSP-based input/output mixer that you can control via the free TASCAM Control software. With a pair of XLR/TRS combo inputs on the front panel and an 8-channel optical input around back, the TASCAM Series 102i USB interface offers up to 10 channels of simultaneous recording.

The Series 102i interface employs TASCAM’s Ultra-High-Definition Discrete Architecture (HDDA) mic preamp design that delivers audio with extremely low self-noise to capture every detail of your musical performances. Each channel also features a TRS jack with switchable line/instrument level operation, so you can easily track keyboards, guitar, bass, and other instruments alongside your microphones.

Built with mobile recording in mind

At Sweetwater, our Sales Engineers put together recording solutions that work for you, and one of the things today’s engineers and musicians need most is the ability to record wherever they want. The tough all-metal housing and reinforced ends make the Series 102i rugged enough to withstand hotel room recording sessions on the road. The sleek, angled design keeps your levels in sight and offers easy access to gain and volume controls. It’s small enough to fit in your laptop bag but powerful enough to trust with your next masterpiece.

The Series 102i comes with Steinberg DAW software for recording and mixing your music. In addition, you also get versions of IK Multimedia AmpliTube guitar amplifier modeling software and T-RackS mastering software, along with iZotope Neutron Elements.

At the heart of both the SERIES 102i and SERIES 208i is TASCAM's proprietary Ultra-HDDA mic preamp, widely acclaimed for its low noise and clear sound. Both new models support recordings up to 24 bit/192 kHz Hi-Res audio and are compatible with Windows, Mac, and iOS devices. From devices supporting S/MUX output or devices with word clock I/O connectors, the SERIES 208i provides expandable input capabilities and easily adapts to fit professional environments with its versatile functions and compact size. As a standard value-added feature, both models ship bundled with a suite of software: at the core of music production is Steinberg's Cubase LE / Cubasis LE; for instrument recording included is IK Multimedia's AmpliTube with guitar/bass modeling and powerful effects; newly added to the bundle is iZotope's redesigned Neutron Elements, which includes 4 powerful tools for creating great mixes; last but not least, IK Multimedia's T-RackS mastering software will finish up users' creations into high quality masterpieces. The SERIES interfaces' sleek and elegant silver-colored design, enhanced functions, and powerful suite of bundled software will inspire creativity and greatly expand recording and production capabilities for musicians, producers, or anyone seeking to create and produce professional quality recordings on the go or in the studio. SERIES 102i: https://tascam.com/int/product/series_102i/top SERIES 208i: https://tascam.com/int/product/series_208i/top Subscribe to TASCAM USA: https://www.youtube.com/TASCAMUSA?sub_confirmation=1 Have further questions? Contact the TASCAM Tech Support Team here: https://tascam.com/us/support/contact Signup for the TASCAM Newsletter: https://bit.ly/2kHntdW Shop TASCAM Refurbished Gear & T-Shirts: https://reverb.com/shop/tascams-gear-outlet