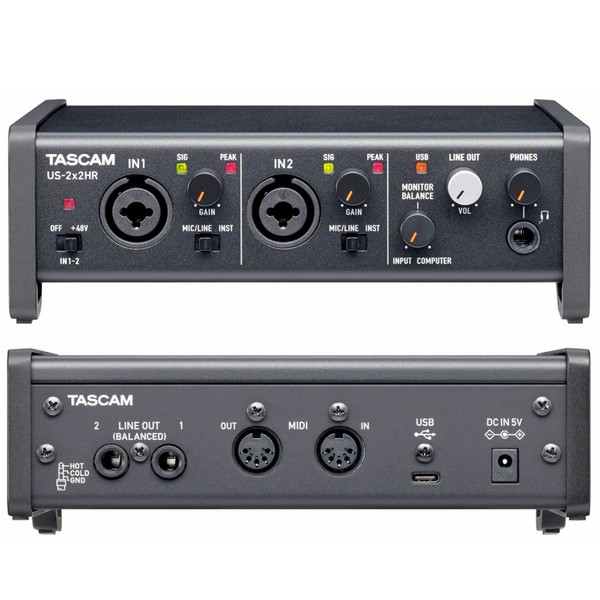 The TASCAM US-2x2HR USB-C audio/MIDI interface (PC/Mac/iOS) brings rich 192kHz audio, dependable 5-pin MIDI in/out, and super-low-latency tracking and monitoring to your home or mobile studio setup. The US-2x2HR's two onboard Ultra-HDDA mic preamps give you 57dB of clean gain to capably drive most dynamic mics and onboard +48V phantom power to support your studio condensers. Each preamp features a combo TRS/TS 1/4-inch input with Mic/Line-Inst selector to simultaneously capture a rhythm guitar, bass, or keyboard as you track vocals. You also get MIDI in and out for interfacing with your keyboard controllers and drum machines. Perhaps best of all, the TASCAM US-2x2HR delivers all of these features over USB bus power — just a single USB-C cable (included) from your laptop to your interface is all you need for power and connectivity. As for monitoring, the TASCAM US-2x2HR gives a 1/4-inch headphone out and stereo 1/4-inch line outs, each with independent level controls so you can mix projects on loudspeakers or your favorite studio cans. If you're looking for a USB-C interface that's equally at home in the studio or on the road, the TASCAM US-2x2HR USB-C audio/MIDI interface from Sweetwater is worth a look.

The TASCAM US-2x2HR gives you two Ultra-High-Definition Discrete Architecture (Ultra-HDDA) mic preamps to capture audio with extremely low self-noise and home in on every detail in your musical performances. The US-2x2HR dual preamps open up the possibility of stereo miking and near-far cab mic placements. And since each combo input can also accept a 1/4-inch TS or TRS connection, you can easily track guitars, keyboards, and line-level audio gear.

Supports sample rates up to 192kHz

High levels of latency — the time it takes for an audio interface to convert your analog signal to digital as it enters your computer and back again in the form of sound — can render even the best interfaces practically unusable. Fortunately, this is no concern with the TASCAM US-2x2HR. The latest drivers give you latency as low as four samples over its rock-solid USB-C connection. In other words, you can monitor yourself through headphones with no trace of delay as you pour your heart into a performance.

Whether you're new to digital recording or not, the TASCAM US-2x2HR's included software bundle is a major value add. This bundle includes licenses to Cubase LE (Mac/PC) and Cubasis LE (iOS), two great platforms for capturing music on the move. Cubase LE provides a cutting-edge music production studio, giving users what they need to get started creating music. Cubasis LE is a compact version of Cubase for your iPad, providing the same look as its bigger sibling.